It may have been the Semitotext(e) SF anthology, published in 1989, that first triggered our interest in sci-fi, from pulp escapist distractions to a viable and vibrant literary form, capturing social, sexual and urban quandaries of both the present and the future. Veering from gravitas to satire, sci-fi happens just around the corner and not solely in a galaxy far, far away – it might even happen in the rooms of your own home. Extra Reading brings you sticky, spectral spacesuits and distant metropolises populated by lustful androids and aliens. With this selection of sci-fi books recommended by friends (that we came to know as devotees of the genre), we reimagine the places we inhabit, to affect the present sensually, where futures keep on multiplying. Stories that are written to express, to sublime or to transform the hopes and anxieties of today. There’s no need to blush about the motley copy of a vintage science-fiction book sticking out of your pocket with a cosmic purple and blue lightsabre on the cover. 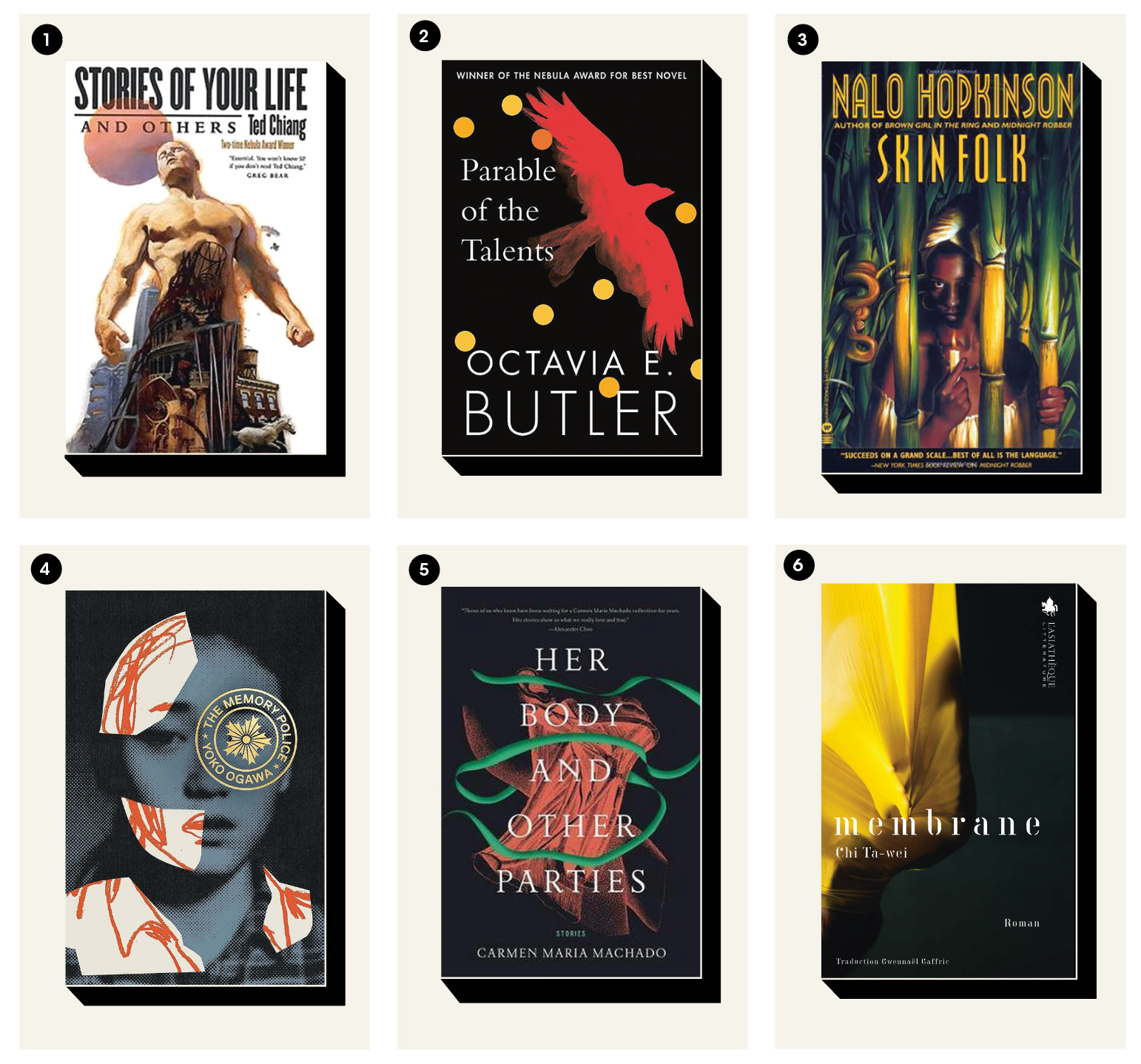 STORIES OF YOUR LIFE AND OTHERS 1

Hello, it’s James Taylor-Foster. In the novella in this collection, Story of Your Life – which was also made into a major film called Arrival (2016) – aliens try to communicate with humans. The aliens use a sort of ink that comes out of their body. And they write cyclically: they know the end of a sentence before they’ve started it. If you think of the way we talk, we don’t necessarily know where a thought is going when we begin to speak. We’re more linear
in that way. There’s something so unbelievably sensitive about imagining a space for inter-species intimacy; it is super bodily. Story of Your Life is about finding the time and the curiosity to be together: to listen, to speak and to understand.

PARABLE OF THE TALENTS 2

Capturing a delicate form of eroticism and the tension between objects and people, The Memory Police is set in a Japanese village where things disappear overnight. As objects vanish, rituals emerge to say goodbye to them, exposing all of their particular details. If you are not allowed to have lamps, it makes you reconsider what you appreciate about them; experiencing the light, the heat, how perfectly the lamp stands next to your bed.

HER BODY AND OTHER PARTIES 5

I’d also like to recommend the writer Carmen Maria Machado, particularly the stories ‘Inventory’ and ‘The Husband Stich’ in this collection. Both explore the relationship between deep violence and refined pleasure. The writing is sexy, caustic, comic and deadly serious at the same time. Machado asks: will you come with me, in search of doppelgangers, ghosts and girls with bells for eyes?

Hello, it’s Clara Pacotte. Hope you are well. I am fine, just a bit bored as everything in Paris is closed at the moment. I’m thinking of The Membranes by Chi Ta-wei. In the book, an aesthetician relives sexuality through a device that scans a person’s membrane.
It is primarily applied to another’s body, as a form of protective and anti-ageing skincare. The device records what has been lived by the person wearing it and the protagonist then puts it on to experience their sensorial
memories. 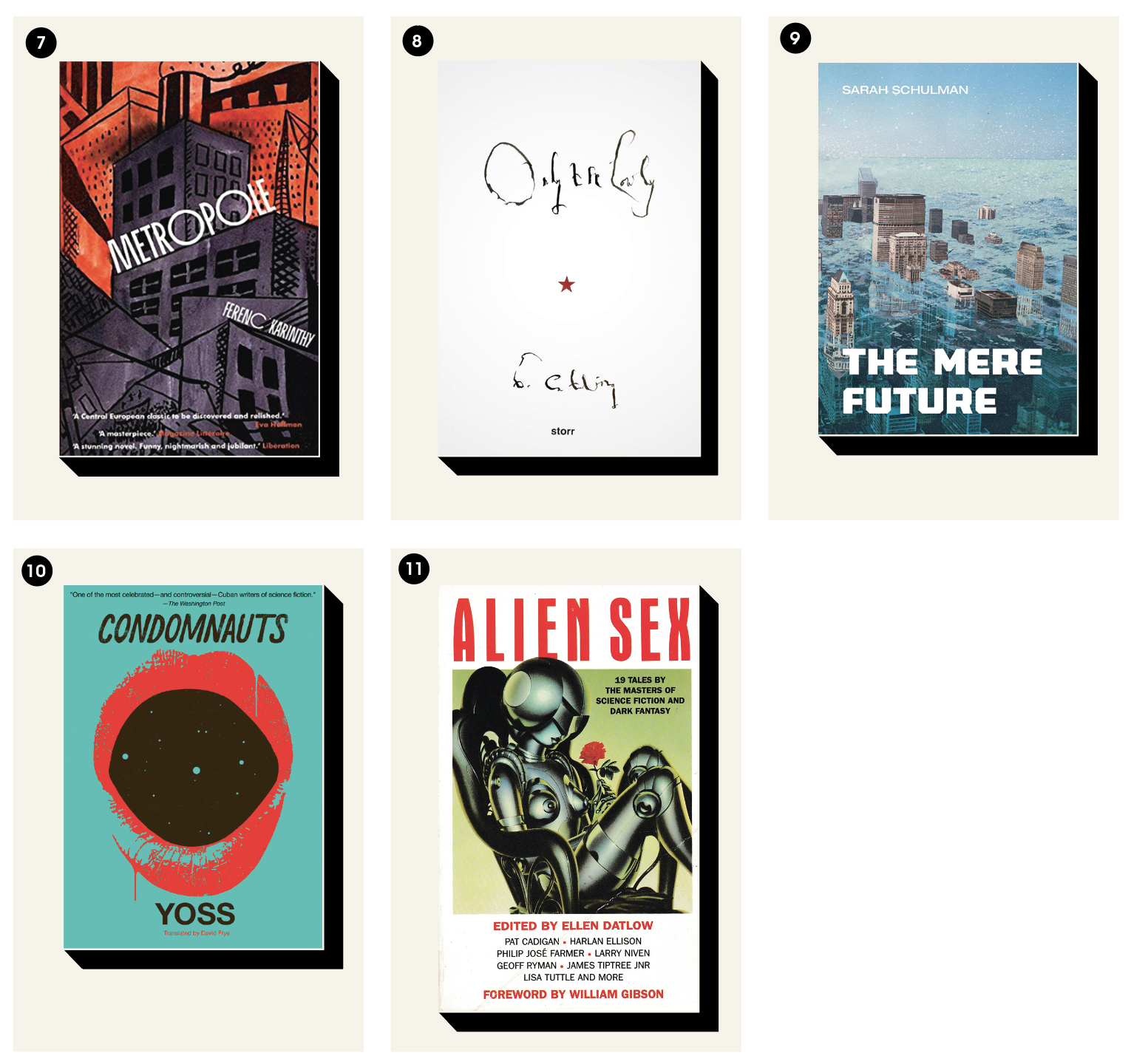 Hello there, it’s Dan Fox! I read Metropole when I arrived in New York. Moving to a new country is quite a sci-fi experience, even when you speak the language. Karinthy writes about a talented linguist who falls asleep on an aeroplane and lands in an unknown city. He can’t read any of the signs, nor understand how the telephone system works. The only person he can sort-of communicate with is a hotel elevator operator. There is an almost sexual charge between them. It’s like when you hold a stranger’s gaze in the metro for two seconds too long.

It’s Claire Finch here, how are you? For the longest time, this book lay on my bedside table like a hand reaching out to me. The story takes place in a futuristic city, where a new, hopeful politician has been elected and citizens enjoy a universal level of comfort. And everyone works in marketing. The characters are deeply romantic. Yet their liaisons are so frontal and non-climatic, like: ‘And then we fucked.’

Hey. It’s Michael Portnoy. At the moment, I’m developing a film about alien sex and this title by the Cuban author and heavy metal singer Yoss crossed my radar. It’s a space opera about a diplomat tasked with searching for extragalactic new life forms. As is the custom, he must first make love with them in order to initiate good trade relations. From the premise, I was imagining a kind of genital Codex Seriphinianus meets ninth dimensional chess, which the book didn’t quite live up to. So, for my taste, there could have been a lot more sex with beautifully preposterous flesh forms. Oh well. Still a pretty good read.

ALIEN SEX: 19 TALES BY THE MASTERS OF SCIENCE FICTION AND DARK FANTASY 11

Ingeniously titled, this book contains nineteen hit or miss short stories. You can also find it as an audiobook! The best opening line is from Harlan Ellison’s ‘How’s the Night Life on Cissalda?’ It reads, ‘When they unscrewed the time capsule, preparatory to helping temponaut Enoch Mirren to disembark, they found him doing a disgusting thing with a disgusting thing.’

Published in Extra Extra No 16

Dusk arrives in Rotterdam. The tangerine sky is full of sweet promises. Bite into its peachy palette, the juices of the evening running down your chin. Elfie Tromp is your…