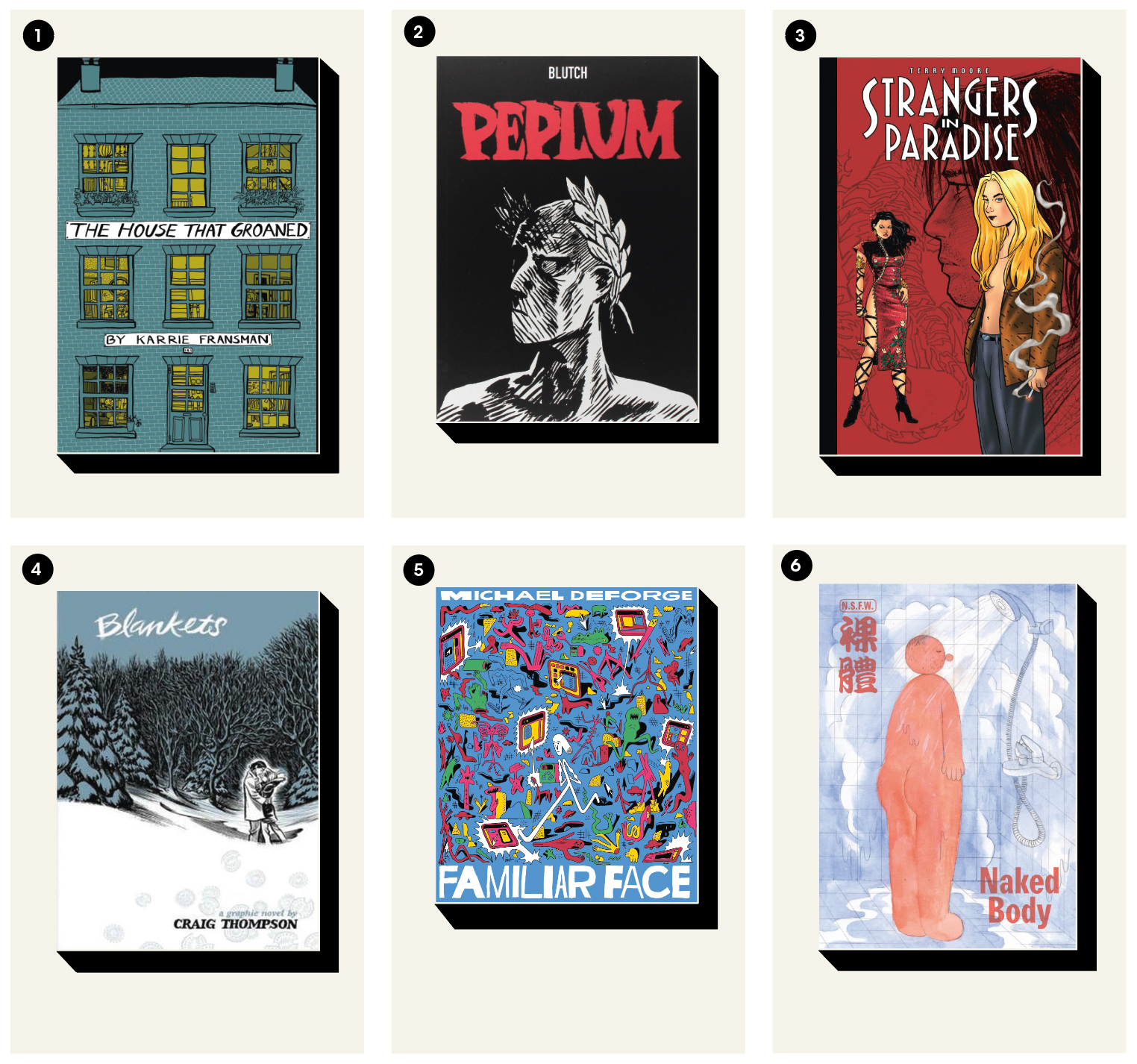 THE HOUSE THAT GROANED 1

If you’d like to feel the sexuality of the ancient Roman world, before Christian ethics, I recommend Peplum by Blutch, where murder, ritual and ecstasy are manifestations of the everyday.

The sweetest sex scene I know is in Blankets by Craig Thompson. A coming-of-age love story on how two very Christian teenagers fall in love for the first time despite all their beliefs. It’s an endless waiting for it to happen, and oh… it’s so worth it, it brings you back to this special feeling you experience with first times.

Hi! It’s Nicholas Burman. I want to tell you about Michael DeForge’s Familiar Face, a drama on embodiment and desire in a heavily digitised and industrial world. This is a world where technology rules, and bodies morph as often as their surroundings. The figures, whose stretched limbs interlock, are forever stuck in my mind; they seem to have found serenity in a universe whose purpose is to distract and antagonise.

One of my favourite titles is an anthology of contemporary comics from China, which was published by the artist Yan Cong, who invited artists with the provocative request that all characters should be naked. The range of styles in here is dazzling. Two stories stand out to me. Hanada’s five-page strip, in which two giantesses share fluids in a deeply folkloric and deliberate tale. And of course, Cong’s own contribution, it’s such a darkly comical illustration of bodies and desires that can come about because of isolation and over consumption. You will love it. 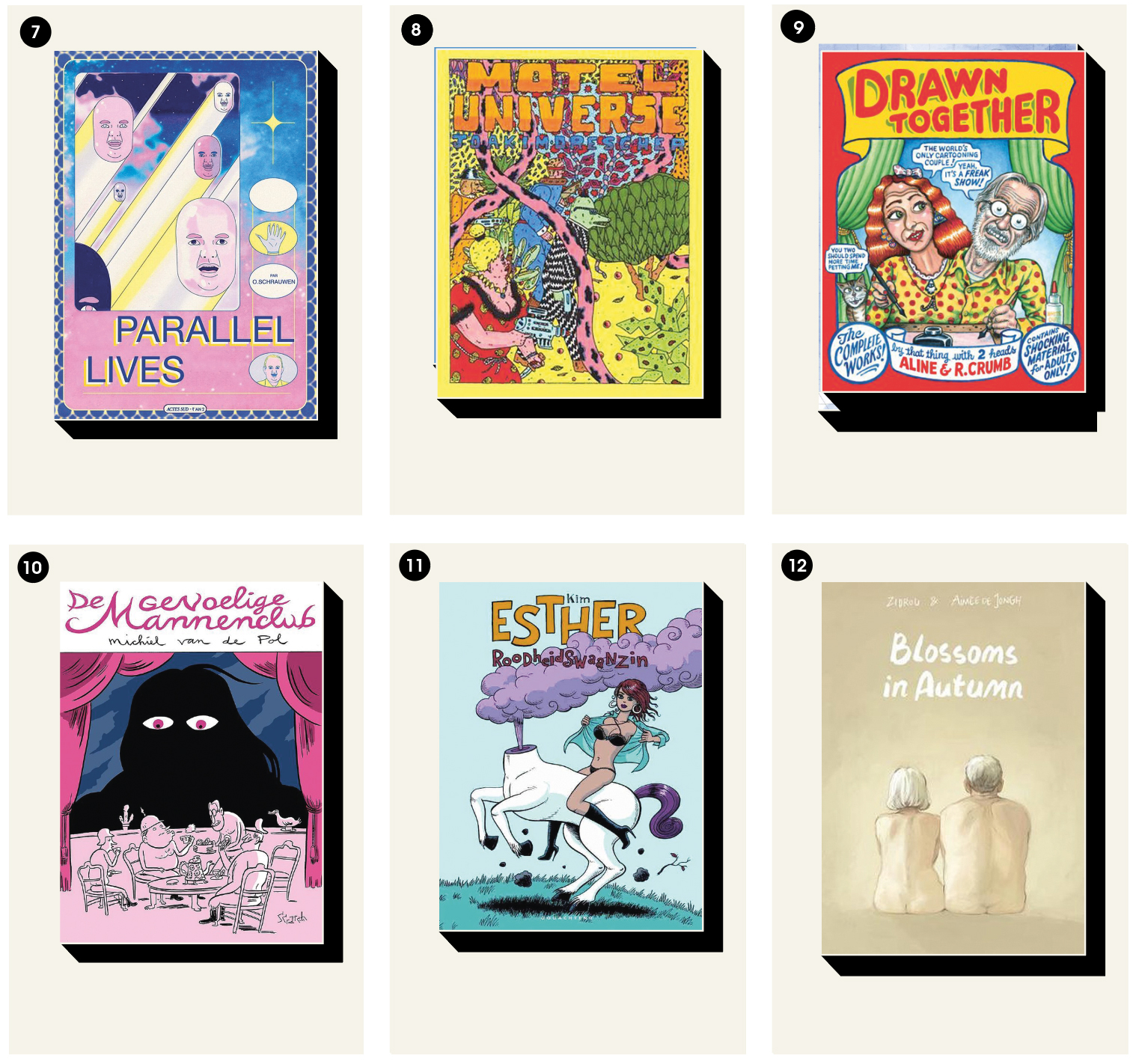 Hello, it’s Fiona Lutjenhuis. I’m just finalising the drawings for the next Extra Extra Radio Show. It’s a pleasure to meet you! Today I would like to share Parallel Lives, which is flooded with vibrant, pastel colours. Olivier Schrauwen writes and draws with a certain ‘fuck it’ attitude that is unpredictable and humorous.

The beautiful series Motel Universe by Joakim Drescher makes you feel like there’s no tomorrow. The drawings are a feast for the eyes, the pages are filled with colourful characters and the storyline twists your mind in a fabulous way. Imagine sex on a macabre jungle planet!

Good morning, it’s Joost Pollmann. In 2012 the book Drawn Together was published (by Liveright), in which Aline Kominsky and Robert Crumb – as a couple that has always been in the forefront of counterculture, underground art and stubborn anti-establishment attitude – didn’t shy away from sharing their erotic adventures: the stories in this anthology are drawn by both artists. Kominsky and Crumb shamelessly share their intimacies with (voyeuristic) readers, and in doing so create a parody of Scenes from a Marriage, the famous miniseries directed by Ingmar Bergman in 1973. Without this shamelessness, of course, the book would have been false and hypocritical. Most noteworthy is the story ‘A Couple a’ Nasty, Raunchy Old Things’ in which renowned artists such as Charles Burn and Art Spiegelman participate in the (sexual) autobiography of the happy couple and mingle their drawing styles with those of Kominsky and Crumb: a hearty mix. The highlight of the story is the panel wherein Aline depicts the phallus of her husband in its actual and formidable size, exclaiming: ‘It’s so cute!’

I want to share with you Michiel van de Pol’s new graphic novel. Harry, the protagonist, is married to Vera, who takes off her clothes on the very first page. She goes out in the street, harasses a stranger in the park and encounters Doctor Cagliari , a scientist who inoculates her with an elixir that enhances her sexual drive even further. This is a hilarious story about men’s fear of lust – how to tame a giant woman when you’re a tiny man.

Kim Duchateau is a Belgian comic artist who has become widely known for drawing the geeky adventures of his heroin Esther Verkest, a sexy redhead in high heels. Duchateau works in the old, Flemish tradition of absurdism, however, in the centre of his emphatically illogical universe there is always this Victoria’s Secret-like pin-up girl, a cruel but witty bombshell that keeps confusing the (male?) mind because she always mixes lust with laughter, a rather incongruent pair. Fifteen titles were brought together in the anthology Roodheidswaanzin or ‘Gingerbitch Madness.’

Hello dear, it’s Erin La Cour and Rik Spanjers. We are currently in our Amsterdam Comics space. You should come and visit us! We’d like to recommend Blossoms in Autumn, a French–Dutch collaboration by Zidro and Aimée de Jongh that revolves around the passionate romance of an elderly couple. The scenes of lovemaking are truly endearing, showing that love and passion will always be present. It will surely win over your heart.

Published in Extra Extra No 17

A/N or ‘author’s note’ is a term used in fan fiction. It can come at any point across the length of a fan work. A/Ns are used to convey…

Parasite 2.0 on Playing with Expectations and Props for Performing Otherwise

The modernist notion of sensuality is perhaps epitomised by the splayed green marble walls of Mies van der Rohe’s Barcelona Pavilion, or the exuberant black onyx in Adolf Loos’s…

Meg Stuart’s oeuvre is an atlas of emotions. Each choreographic work charts a new territory, within which shifting affective and physical states play out. Bodies come together in…

https://extraextramagazine.com/wp-content/uploads/2020/05/3-PERSIS-BEKKERING-no12.mp3   Agnieta stops, her legs tired, her arms feeling heavy. The service lift broke down yesterday, but under no circumstances is she allowed to use the…